House hunting was never big on my to-do list. I always said I'd buy a house when I got married. Plus, I never wanted the responsibility of taking care of a house on my own; especially the outside. Back in October I believe it was, I was sitting at my dad's and he asked me if I was ever going to buy a house. I said, I didn't know because I wanted an unusual house. I wanted the hard wood floors and the character. All of which come from buying an old house. I had a house in mind that I had seen online quite a while ago. I pulled it up on my phone to give my dad an idea of what type of house I would want. Much to my surprise, the house was listed as a short sale so now it was in my price range. My dad grabbed the phone and called his realtor. In short, I went and saw the house, put an offer in, and my offer was accepted. This all took a few months because it was a short sale, so you're dealing with the bank. Once the offer was accepted, I had an inspection done. Sadly, the inspection failed horribly.

Over the course of those few months, I found out who owned the house. His name was John Charles N. My dad's name is John Charles M. The owner's late ex-wife's name was Susan. Susan is my mom's name.  The address to the house is 526 (W. Rudisill) which equals 13. The lot number to my child hood home was 13 and the lot number to my dad's house now is 13. Before I saw the house the first time, my mom found an article online about the house being in the historical society. The article had a picture of the owner, John Charles, on the steps of the house. It was a pretty cool article. I'd post the link here, but it's no longer up on the newspaper's website. I told my mom that if I bought the house, I wanted to frame the article and hang it somewhere. When I first went to see the house, I was going to walk downstairs into the basement and there was the article left hanging in the stairway. Underneath the article was another article about the Chicago Cubs. My dad is a die hard Cubs fan.

Sadly, like I said, the inspection came back with mildew, asbestos, foundation problems, and a host of other things.  Being that the house was in short sale, the owner, nor the bank were in a position to fix these repairs.
Here are pictures of the house. It truly was just as amazing as it looks, if not more in person. 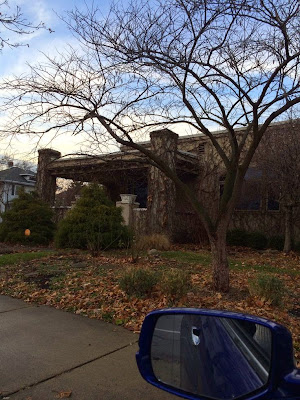 Front of the house.﻿﻿ 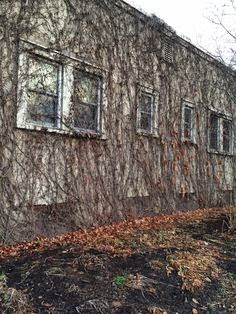 The house was completely covered in vines. It made it look haunted, but also was cause for concern as to what it was doing to the foundation of the home.