We're lame. Or, maybe just me?

This conversation makes me laugh. 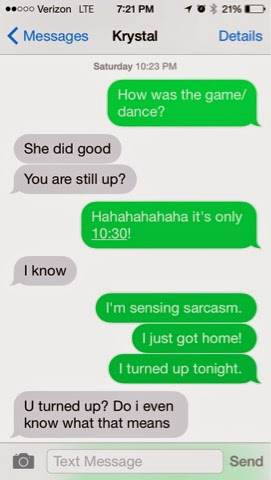 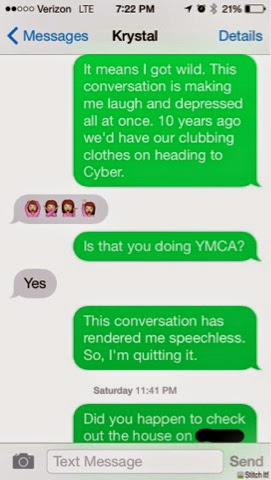 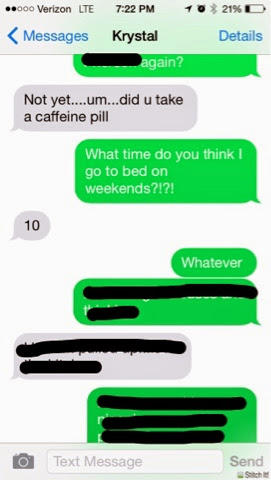 Hard to put into words.

Trying to explain a dream is nearly impossible. The dreams that stick with you all day are the worst. It's so weird how you go to sleep the next night and wake up having either forgotten the dream you had the night before, or at least the emotion you carried with it.
I know I've blogged before about dreams I've had about Joey. It's just so crazy to me how every single dream has the same premise. Our minds really are a powerful thing.
The other night I had a dream that seemed to be a mixture of several things. I was going to a party and who better to style me than Diane von Furstenberg ("DVF") herself? She pulled a pair of pants, shirt, jacket, and a ridiculous pair of heels. The pants I was sure were going to be way too small, but being that DVF picked them out, naturally they fit perfectly. The heels were a cake walk and she even styled my hair. She took so long that she was even late to her own party. Oh, and when I looked in the mirror, before heading to the party, somehow I was no longer wearing the jacket, but a super cute flattering sweater. I went to the party and ate a few of the scraps that were left since I was late. I didn't speak to anyone and was back home changing out of my fabulousness.  Wait. Was that a dream?
Here I am stuck trying to figure out how to put into words the next part of my dream. Maybe instead of trying to explain the dream, I should focus on how it made it made me feel.
It makes me feel heartbroken, sad, and helpless. Sometimes it's like Joey comes back and not necessarily from death, but he comes back and somehow I find out and I can't get in touch with him. He won't answer my calls, or see me. There's times that he's really sick - even more sick than he was, and again, I can't get to him. I can't see him for some reason. But, why? I just want to be there for him and be with him.
I hope sometime my subconscious will bring us together again. In the meantime, I hope he knows I was there when he passed and that he's in my heart everyday.
Posted by Rachel M. at 7:55 PM No comments: